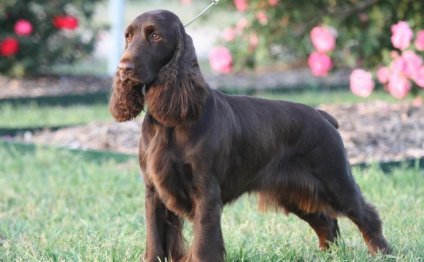 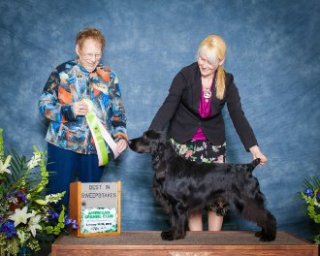 Health Clearances:
To young for health clearances, but will be done when he is two

Hal is a Partner x Celeste son who resides in Wisconsin where he hunts, plays and shows in the ring. There was always something about this naughty sweet natured puppy that attracted Jeff to him and maybe it was because the first thing he did was take his keys out of his jacket. There was another Field Spaniel, Major, which was a naughty puppy (no one would ever know that because when you met him he was so well mannered and he doesn't know a stranger). He has phatom tan coloring because his father was liver and tan, so in the sunlight there are times when he looks black and tan. This young rising star is showing us exactly what we have been looking for in a Black.
Hal’s accomplishments have surpassed our expectations and we are very proud of him with the limited showing that he has done. His achievements include:

Best of Breed in the 4-6 Month Puppy and Group One in the Sporting Group – Waukesha Kennel Club – This was his first time ever in the ring!

Reserve Winners Dog to a Major – 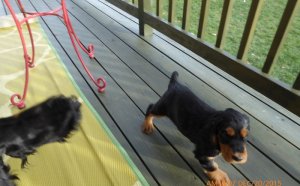 So, you want to adopt a Field Spaniel, huh? Great idea! Want to hear an even better idea? Rescue an adult Field Spaniel… 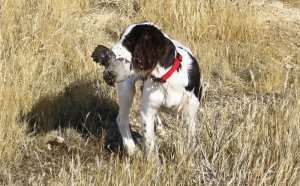 As one is searching for a breeder or looking through hunting articles, the term “field bred” will appear. A “field bred”…