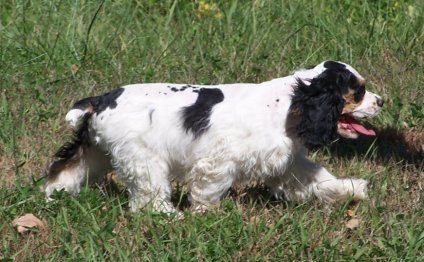 A second-generation Cocker Spaniel breeder, handler and judge, Julie Virosteck of Wellsville, Kan., knows firsthand the effect of canine epilepsy. Not too many years ago, her son’s Junior Showmanship red-and-white male Cocker Spaniel, “Dreamer, ” began having seizures for no apparent reason.

Dreamer had excellent breed type and loved dog shows, finishing his championship title from the puppy class. When Dreamer was retired from showing, Virosteck began breeding him and allowed others to use him at stud. The dog’s first seizure came three years after her son began handling him in Junior Showmanship.

Virosteck was crushed. “I saw Dreamer have many seizures, ” she says. “He was always completely stiff and out of control. He looked petrified. The only thing I could do was to hold and comfort him so he wouldn’t throw himself around and get hurt.”

Then, Dreamer did get hurt one night while having a seizure in his crate, a place where Virosteck thought he would be safe. “I remember the morning I found Dreamer, ” she says. “The veterinarian surmised he had injured his back by throwing himself into the water bucket. An X-ray showed his back was not broken, but further testing indicated he had no feeling in his feet. We took him home and began a regimen of steroids and pain killers while keeping him confined to his crate.”

In time, Dreamer was running and playing again in the yard with Virosteck’s son and the neighborhood children. “They would come to our house to play ‘Dog Show’ with the ribbons Dreamer had won, ” she says. “We set up a ring on the lawn, and the Dog Show would begin. Dreamer and his kennelmates loved the attention, and the kids loved all the dogs.”

Virosteck knew Dreamer’s epilepsy was a time bomb until the next seizure occurred, and she recognized her responsibility as a breeder. Though she had wanted to breed him more, she knew she could not. She began notifying the owners of Dreamer’s puppies and the breeders who had used him at stud about the seizures.

Ten months after Dreamer’s first seizure, Virosteck again found him in his crate unable to walk. This time the veterinarian’s news wasn’t optimistic. Dreamer had no feeling in his feet even when the veterinarian gently squeezed them with a clamp. Steroids and other medications were tried, but the beloved Cocker Spaniel was unable to use his hind legs for the rest of his life. Virosteck made the difficult decision to have the dog euthanized at 10 years of age, and her son began working with another dog.

“My son had never lost a dog he was close to, ” Virosteck says. “He was lucky to have other dogs in his life. Though they didn’t take Dreamer’s place, they helped fill the void.”

Epilepsy is a complex disease that is believed to affect from 2 to 4 percent of dogs. Individual bloodlines and some breeds may have a higher incident rate. The good news is that epilepsy is successfully controlled in more than two-thirds of dogs and the majority of seizures are not life-threatening and do not require emergency treatment.

“If epilepsy is symptomatic, sometimes treating the underlying disease will cure the epilepsy, ” says Dennis O’Brien, D.V.M., Ph.D. DACVIM, professor of neurology at the University of Missouri College of Veterinary Medicine. “For example, removing a brain tumor is likely to cure epilepsy associated with the cancer. More often than not, we either cannot find the cause of epilepsy, which makes it idiopathic epilepsy, or even if we can find and eliminate the cause, some damage has been done and the epilepsy continues. Thus, we use medications to control the seizures.”

Idiopathic epilepsy (IE) is a diagnosis of exclusions. When no condition that could cause seizures can be found, dogs are determined to have IE, or repeated seizures of unknown origin. A biochemical defect in brain cells or the brain environment is believed to cause idiopathic epilepsy. About 66 percent of dogs with IE experience their first seizures from 1 to 3 years of age.