My passion for Cocker Spaniels and dog shows started in 1969 at the age of 10 when I had a job at a cocker spaniel kennel, grooming and walking dogs. The breeder gave me a sweet buff American Cocker named "Nonnie" for my own. After winning a few ribbons at dog shows I was hooked and knew then that breeding and showing dogs would become a big part of my life. In fact, we have raised 10 generations of this breed since 1980!

With my husband Dave, we purchased our first show cocker in 1980, a black female who became the foundation of our "Nonnies" line. Since then more than 70 of our dogs have earned championships and at least 14 have obedience titles, many of them placing in the top 5 in Canada in conformation or obedience. Many have won top awards such as Best In Show, Best Puppy in Show, Group & Best Puppy in Group wins, Specialty Best Of Breed & Best in Sweepstakes. We are most proud of having bred and exhibited father and son black and tans who were both American & Canadian Champions, group winners, Canadian National Specialty Best of Breed winners and had wins at US Specialties and at the prestigious American Spaniel Club shows.

We have also bred a High In Trial Obedience winner, three #1 Obedience Cockers in Canada ('88, '98, 03) and the #1 Flyball Cocker in Canada ('03) Another dog of our breeding has won awards as a Therapy Dog. Our children Lee & Kelsey also enjoyed showing the dogs in Junior Showmanship when they were young.

In 1997 our first English Cocker puppy "Dottie" came to live with us and became the foundation for our line. Our English cockers have been equally successful at the dog shows as have our American cockers. Highlights have been Adam winning the top winning English Cocker in Canada and #8 Sporting Dog award in 2007 with 7 Best In Show wins and many group wins & placements . The 2 litter sisters Ducky &Casey won Best Puppy in Shows the same year. Then in 2008 2 more littermates, Liam &Posh won Best Puppy in Show awards & Liam won a Best In Show as a puppy. Also our European import Desi won Winners Male at the US National show for English Cockers. These 3 are all now American champions.

2010 was a very exciting year for us. Liam became the top winning English cocker in the USA and litter sister Posh was the top winner in Canada!

While the show wins are exciting, most of our puppies and retired show dogs live out their lives as beloved family pets. We are equally proud of our dogs who have enriched the lives of so many people, not as champions of dog shows but as loving companions... champions of the heart!

Over the years, we have tried to breed for the "total package": health, intelligence and sweet personalities combined with beautiful Cocker... 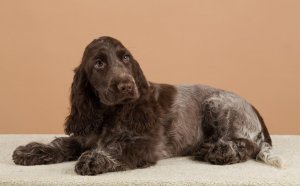 If you would like to get on our puppy waiting list, please complete our online Puppy As of 2014 we will be leaving natural…