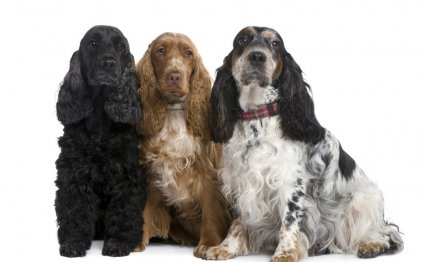 An active dog, they will keep busy in the house, playing with toys and objects and family members. They love being around people, crave attention, but also have a working dog's self-sufficiency. Cocker Spaniels are quick to learn, obey easily, and have a sweet and trusting nature. They are generally good with strangers, but make excellent watchdogs when they feel that the home is threatened.

Cocker Spaniels are amazingly adaptable. If you’re an active hiker, these dogs will keep pace with you all the livelong day. If you’re a couch potato, your Cocker Spaniel will gladly join you on the sofa. They’ll be perfectly happy in an apartment or house, as long as they get a decent amount of exercise and attention.

Things You Should Know

Because they have been popular pets for several decades, Cocker Spaniels have suffered from overbreeding, which has caused a number of health and personality issues like aggressiveness, shyness and roaming that are not typical of the breed. Take care to socialize and train your Cocker Spaniel puppy to make it comfortable with children and other animals.

The smallest of the "sporting group" of Spaniels, Cocker Spaniels were originally bred to hunt in the English countryside. They were especially good at hunting woodcocks, hence the name "cocker."

During the mid-19th century, American breeders developed a smaller Cocker Spaniel that became a popular pet across the country. American Cocker Spaniels differ so much from the English variety that they are now considered a separate breed.

The Look of a Cocker Spaniel

Noted for their silky coats and long ears, Cocker Spaniels have small, sturdy, well-balanced frames. Their clean-cut heads have wide muzzles, square jaws and upper lips that hang over their lower jaws. Their ears are long and feathered, their eyes are dark and almond-shaped and their noses are either black or brown depending on the coat. They have long necks, deep chests, short backs and (usually) docked tails that are carried in line with the back.