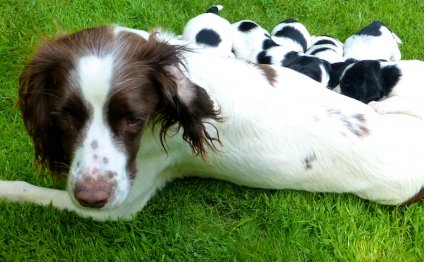 English Springer Rescue America, Inc. (ESRA) is a national referral and foster care pure-bred placement organization, and a 501(c)(3) nonprofit corporation. ESRA's mission is to provide foster care to English Springers impounded by humane societies, private shelters, and animal control facilities nationwide, as well as to offer adoption referral services for those agencies. There are no paid staff, and all our members do what they do on a completely voluntary basis.

English Springers are as susceptible to impoundment as any dog. They are picked up off the streets as strays or relinquished by their owners because of a move, illness or death, financial crisis, or other troubled circumstances. Adoption referral assistance is also available to those owners who can no longer care for their Springers and must give them up for adoption. Through the compassionate efforts and commitments to help, ESRA's volunteer members have successfully placed thousands of Springers in new loving homes.

To be considered for placement in ESRA's database of prospective adopting homes, click here for the adoption application. When received, and after the approval process, we will enter you in our database of homes preliminarily to adopt available dogs. These listings include dogs in shelters and foster homes, and those being relinquished by their owners. 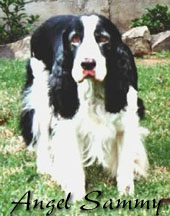 "…Along with this all, my heart was really touched by the mention of my pound dog Sam and the consensus of you all to name our mascot dog after him. It was because of his loss that I began to shelter hop looking to adopt another. I wanted to find another just like him. We all know it's really not possible to replace exactly what we lost, but you don't realize that at the time of the loss.

"But I did find Sam's double, impounded in Oceanside. Although female, she was his color, his size, his markings, his age, it was Sam. When I saw her first, she was not yet shelter property (she came in as a stray). She was in deplorable condition, ears matted to the leather, bleeding sores on her muzzle and feet. The office staff there at the shelter never told me to put a hold of her. They never gave me a reservation slip to fill out. They never told me she would be put down the next morning if I was not there at 9 am. When I did go back for her, she was gone, euthanized because of ear infections. It was this very incident that put me into rescue. How dare this shelter decide that a dog in this condition had no worth and that no one would be interested in it. They couldn't be farther from the truth, as many of ESRA's own rescue dogs with special needs and such have proven.

So, I am honored that all of you will also remember my Sam. He was a great dog; you all would have loved knowing him.

By the way, the dog I did adopt thereafter was Samantha (named after you know who!). She's a far cry from the looks of him!…"

Jan has now left this life, a victim of illness that took her far before her time. We remember her, in part, for sharing with us her favorite version of this famous poem, "The Rainbow Bridge". 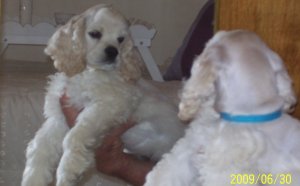