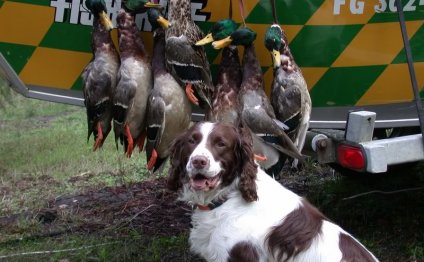 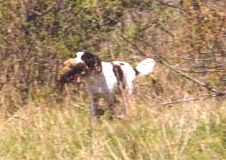 A springer with basic obedience training and some introductory field training will be able to fulfill most hunters’ desires. A bit of training is highly recommended though as there is nothing to compare to a springer’s hard charging trailing of a bird. It is desirable during those times to be able to slow the dog up a bit to ensure an efficient and effective shot. There are times though when a fast running bird will present far too much of a temptation to even the best trained dogs. That is the birdiness of the English Springer Spaniel. 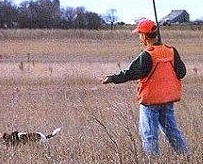 The springer will quarter efficiently in front of the hunting party, staying within gun range and occasionally checking back to ensure it is maintaining a proper working distance. This type of pattern allows for a quiet hunting experience with the handler being able to thoroughly enjoy observing his springer companion methodically and diligently searching the field in front. As a springer gains experience it will utilize the wind extremely well to afford the best opportunity for locating birds. In addition, some springers will learn to "cut-off" a fast running bird, somehow being able to get in front of the bird and thus placing the bird between the hunter and the dog allowing for a better shooting situation. The joy and excitement of watching your springer enjoy itself as it pushes through the cover in front of you makes for a more enjoyable hunting trip. 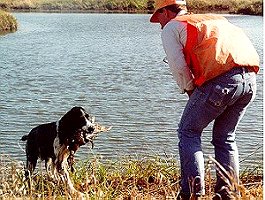 Springers have been utilized extensively in the pursuit of pheasant, chukar, partridge, and grouse over the years. In some geographic locations they also participate in quail and woodcock hunts as well as acting as retrievers from the dove blinds. However, the springer excels at the trailing and hard flush of the pheasant. The excitement of seeing that tail begin its buzzsaw action is a sure clue to its human companion that there is a bird nearby. As the head of the springer lifts into the air attempting to catch a running bird’s scent in the breeze there is no mistaking when those ears rise up on the dog’s head and that tail goes even faster that some fast shooting action is soon to follow. A properly trained springer will complete the package after the shot with outstanding retrieving ability. To the springer, the retrieve is the reward to a hard push on that bird.

Welcome to the ESSFTA Breeder Education and Referral Page. If you re interested in getting an English Springer Spaniel, we… 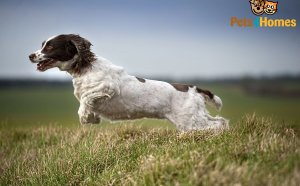