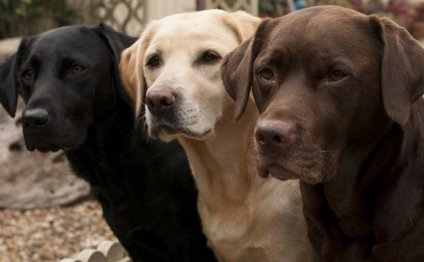 The Labrador Retriever is a strongly built, medium-sized, short-coupled, dog possessing a sound, athletic, well-balanced conformation that enables it to function as a retrieving gun dog; the substance and soundness to hunt waterfowl or upland game for long hours under difficult conditions; the character and quality to win in the show ring; and the temperament to be a family companion. Physical features and mental characteristics should denote a dog bred to perform as an efficient Retriever of game with a stable temperament suitable for a variety of pursuits beyond the hunting environment.
The most distinguishing characteristics of the Labrador Retriever are its short, dense, weather resistant coat; an "otter" tail; a clean-cut head with broad back skull and moderate stop; powerful jaws; and its "kind, " friendly eyes, expressing character, intelligence and good temperament.

The head should be clean-cut and free from fleshy cheeks; the bony structure of the skull chiseled beneath the eye with no prominence in the cheek. The skull may show some median line; the occipital bone is not conspicuous in mature dogs. Lips should not be squared off or pendulous, but fall away in a curve toward the throat. A wedge-shape head, or a head long and narrow in muzzle and back skull is incorrect as are massive, cheeky heads. The jaws are powerful and free from snippiness- the muzzle neither long and narrow nor short and stubby.

The Labrador should be short-coupled, with good spring of ribs tapering to a moderately wide chest. The Labrador should not be narrow chested; giving the appearance of hollowness between the front legs, nor should it have a wide spreading, bulldog-like front. Correct chest conformation will result in tapering between the front legs that allows unrestricted forelimb movement. Chest breadth that is either too wide or too narrow for efficient movement and stamina is incorrect. Slab-sided individuals are not typical of the breed; equally objectionable are rotund or barrel chested specimens. The underline is almost straight, with little or no tuck-up in mature animals. Loins should be short, wide and strong; extending to well developed, powerful hindquarters. When viewed from the side, the Labrador Retriever shows a well-developed, but not exaggerated forechest.

Forequarters should be muscular, well coordinated and balanced with the hindquarters. Shoulders-The shoulders are well laid-back, long and sloping, forming an angle with the upper arm of approximately 90 degrees that permits the dog to move his forelegs in an easy manner with strong forward reach. Ideally, the length of the shoulder blade should equal the length of the upper arm. Straight shoulder blades, short upper arms or heavily muscled or loaded shoulders, all restricting free movement, are incorrect. Front Legs-When viewed from the front, the legs should be straight with good strong bone. Too much bone is as undesirable as too little bone, and short legged, heavy boned individuals are not typical of the breed. Viewed from the side, the elbows should be directly under the withers, and the front legs should be perpendicular to the ground and well under the body. The elbows should be close to the ribs without looseness. Tied-in elbows or being "out at the elbows" interfere with free movement and are serious faults. Pasterns should be strong and short and should slope slightly from the perpendicular line of the leg.

The coat is a distinctive feature of the Labrador Retriever. It should be short, straight and very dense, giving a fairly hard feeling to the hand. The Labrador should have a soft, weather-resistant undercoat that provides protection from water, cold and all types of ground cover. A slight wave down the back is permissible.

The Labrador's hindquarters are broad, muscular and well-developed from the hip to the hock with well-turned stifles and strong short hocks. Viewed from the rear, the hind legs are straight and parallel. Viewed from the side, the angulation of the rear legs is in balance with the front. The hind legs are strongly boned, muscled with moderate angulation at the stifle, and powerful, clearly defined thighs. The stifle is strong and there is no slippage of the patellae while in motion or when standing. The hock joints are strong, well let down and do not slip or hyper-extend while in motion or when standing. Angulation of both stifle and hock joint is such as to achieve the optimal balance of drive and traction. When standing the rear toes are only slightly behind the point of the rump.

Raise your hand if you love Labrador Retrievers!