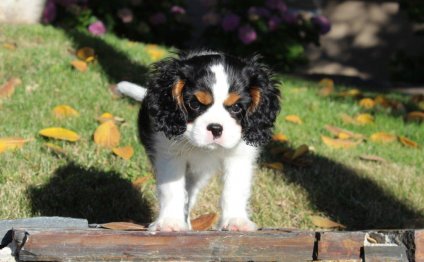 Pretty as a Picture

The popularity of dogs is forever wedded, for better or for worse, to the tastes of royalty. Thus, in 17th- century England spaniels similar to the modern-day cavalier King Charles spaniel enjoyed great cachet because King Charles II, who reigned from 1660 to 1685, was exceedingly fond of them. Indeed, one might say the king was a bit dotty about these handsome little dogs, who were invariably black and tan and who graced the paintings of Titian, Van Dyck, and other artists. Charles was rarely seen, even in his bedchamber, without two or three spaniels nearby; he allegedly spent more time playing with them than he did attending to matters of state; and he decreed that they be allowed in any public building in the land, including Parliament, from which dogs had previously been prohibited. That decree, we are told, remains in effect in England to this day.

Although Charles’ fondness for small spaniels put them on the lap, they pre-existed him by at least 100 years in England and Scotland, and by many hundreds of years in the world at large. As long ago as the days of the Roman Empire (31 B.C. – 476 A.D.), small, spaniel-type dogs abetted hunters by driving game birds into nets. The more tractable and sweet-tempered of these dogs often spent as much time, if not more, with the hunters’ families. Naturally, hunters selected for a placid temperament when they arranged their dogs’ unions, and a civilized personality became standard equipment among spaniels.

The Roman Empire’s trade routes – the information superhighway of that time – extended as far as China. They were the means by which cross-cultural pollination in commerce and fashion occurred. Whether directly or by way of China and the Far East, the spaniels that hunted with their Roman masters were eventually introduce in England. They reached their peak of influences during the reign of Charles II and continued to be highly regarded during the tenure of James II, who succeeded Charles, but that tenure lasted only four years. Not long after the black-and-tan dogs that Charles so loved had come to be called King Charles spaniels in his memory, their fortunes began to change.

In 1689 James II was replaced by Dutch prince William III of Orange and his wife, Mary. When they arrived in England, William and Mary were accompanied by a number of pug dogs. The pug was the Dutch national dog, and soon it became a national sensation in England. 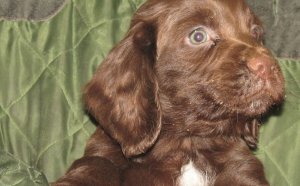 If you are looking to buy or adopt a Cocker Spaniel, you can view our : Introduction Primarily bred as a gun dog, there are…