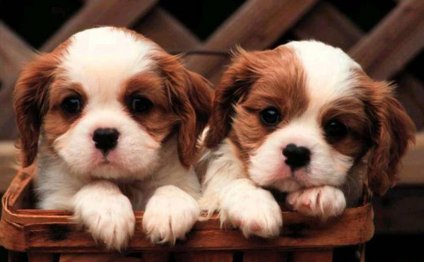 The Cavalier is a small sized dog with a compact, proportionate frame. It has a proportionate head; large eyes which are round shaped and dark brown in color; long feathery ears are hanging down; a black nose; a square, deep muzzle which slightly tapers towards the end; taut lips which are black in color with teeth which meet in scissors bite. This breed has a medium length tail which is feathered. The tail is set at the level of the back is carried downwards when relaxed. When in action, the tail may be carried in an upward curl, although it is never carried above the level of the back. It has short legs which are straight and strong with compact, well padded feet. It has a medium length coat which is silky in texture and may be slightly wavy. The color of the coat can be ruby, or combination of chestnut and white, a combination of black and tan, or a combination of black, white and tan.

The Cavalier King Charles Spaniel is an intelligent, lively breed. It is good with kids, dogs as well as other pets. Its lively nature makes it an excellent companion breed. It is a people pleaser and very easy to train. However, it is prone to Small Dog Syndrome if proper leadership is not shown to the dog. It is friendly with strangers and hence, does not make for a good watchdog or a guard dog. This breed loves to be with humans and thus, is not suited for families which remain away from home for long hours. Being a companion breed, it is well suited to an apartment life.