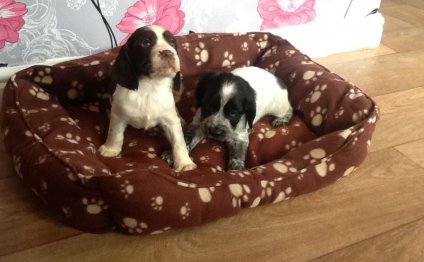 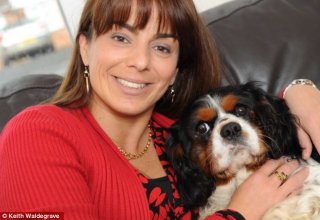 A terrified dog owner took pictures of a horrific 25-minute attack on her beloved King Charles spaniel – as she desperately tried to drag a pitbull off her pet.

Mafalda Clewlow believed her dog, Spot, was just moments from death, clamped in the pitbull’s jaws, and wanted to capture evidence of the ordeal and the dog’s owner so he could later be traced.

The 40-year-old mother-of-two, married to Ade, 46, a former lieutenant colonel in the British Army, had been walking her dog on a public footpath when it was suddenly set upon in the vicious attack.

Scroll down for video

Distress: Owner Mafalda Clewlow and her King Charles spaniel Spot after the ordeal

The shocking incident, near Ouse Valley golf course, Biddenham in Bedfordshire, only came to an end after two good Samaritans stepped in to help wrench the dogs apart.

The owner of the pitbull and his girlfriend handed over fake details after the attack before they fled. 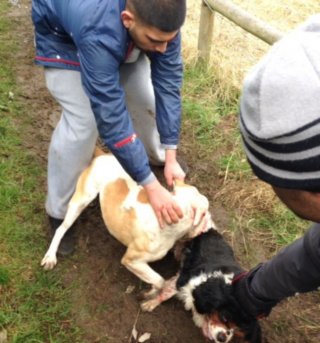 However, Mrs Clewlow took pictures of the man, believed to be in his 20s, before he left.

Despite being covered in huge bites, vets later managed to save Spot.

Last night, Mrs Clewlow, who has spent £566 on vets bills so far, said: ‘It’s horrendous, I felt I was attacked myself.

'Spot has bites all over his body and on his legs. There was blood everywhere. He’s still in agony.’

Terrifying: The pitbull's owner grabs his dog during the prolonged attack

After the incident on Friday, Mrs Clewlow, from Biddenham, posted her pictures on Facebook in the hope of tracking down the dog’s owner.

By last night her pictures had been shared nearly 5, 000 times on the social networking site.

She says she has been contacted by people with information about the dog owner which she is passing on to the police.

Bedfordshire Police confirmed the incident had been reported and said officers were taking a statement from Mrs Clewlow today.