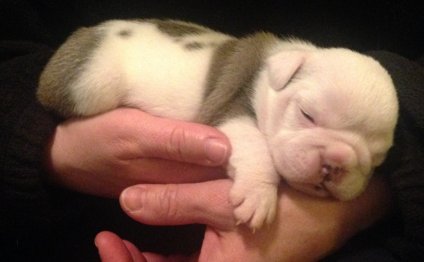 "Abbie at 2 years old—she stands about 11 to 12 inches tall. She has remained fairly small and really loveable. She still prefers to be touching me at all times. She is very much a snuggle bug and loves everyone, even strangers, whether human or other dogs. She doesn't bark a lot but will alert you when someone is at the door, unlike our Pomeranian which barks constantly. She sometimes gets tired of his yapping and will whine at him. Her eyes do tend to "drift, " I guess you would call it a lazy eye."

The English Toy Cocker Spaniel is not a purebred dog. It is a cross between the Cocker Spaniel and the English Toy Spaniel. The best way to determine the temperament of a mixed breed is to look up all breeds in the cross and know you can get any combination of any of the characteristics found in either breed. Not all of these designer hybrid dogs being bred are 50% purebred to 50% purebred. It is very common for breeders to breed multi-generation crosses.

Abbie the English Toy Cocker Spaniel (Cocker Spaniel / English Toy Spaniel mix breed) at 2 years old—"I have owned several dogs over my lifetime (German Shepherds, Border Collies, Pomeranian, Beagle, and several mutts) but Abbie has been the best dog. I sometimes wish I would have gotten one of her siblings instead of our Pomeranian."

"Baby Abagail (Abbie for short) at 9 weeks old—she is a hybrid of an English Toy Spaniel and a Cocker Spaniel, both parents are registered. She is a very loyal and loving puppy; we are hoping she doesn't change. She is very smart and is already playing fetch with her toys. She loves our girls, ages 10 and 7. Abbie goes everywhere with me, she settles right down in the car while we are shopping and follows me all over the house. When I am at my computer, you can bet she will be right by my feet. She's so funny, she thinks she has to be touching me at all times by laying her head on my foot or in bed she has to be between me and my husband. When called by name she sits down and looks at you like "OK, here I am, love me." The only thing I have found as maybe a downside of this hybrid is she tends to stay cold."