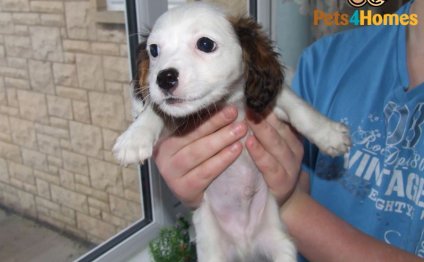 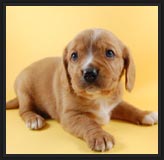 The Beaglier was created by the crossing of two breeds, the Beagle and Cavalier King Charles Spaniel. They are often referred to as a “designer dog” and are particularly popular because of their exceptional temperaments. Small to medium in size, the Beaglier typically has the shorter muzle of the Cavalier. Beaglier’s have large, expressive eyes, are lively, and athletic. Read more…

The Cavachon is created by crossing two breeds: Cavalier King Charles Spaniel and Bichon Frise. They are typically referred to as “designer dogs”. They have become popular companions, especially to allergy sufferers. the Cavachon possesses large expressive eyes and a sporty appearance. They are alert, sturdy, animated, and lively. Read more… 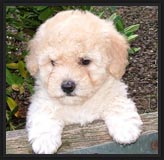 Cavoodles must be one of the most popular designer breeds, and for good reason. They make excellent family dogs. They’re great with other dogs and pets and of course fantastic with kids. Cavoodles are a cross between a Cavalier King Charles Spaniel and a Poodle. Most Cavoodles are either toy size or miniature size. Read more…

The Cockalier is a hybrid or designer breed that is a mix between the Cavalier King Charles Spaniels and a Cocker Spaniel. For the most part, the Cockalier will tend to take on more of one of their parent’s shape than a combination of both. As a result, some Cockaliers tend to be somewhat short and have bodies that are stocky; similar to that of the Cocker Spaniel. Read more… 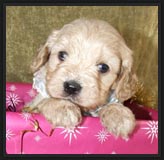 The Jug is a cross between the Jack Russell and the Pug. Small and stocky these little characters a quickly becomming a very popular choice for anyone looking for a great companion. They usually have a short coat unless crossed with a rough coated Jack Russell. Jugs make adorable, loving companions and are great little family dogs with huge personalities. Read more…

One of the most popular and well known of the designer dogs, the Labradoodle is the result of an initial cross between and Labrador and a Poodle. The Labradoodle is reliable and is being developed as a breed in it’s own right and may one day be recognized by kennel clubs in the future. Read more…

The Maltese x Shihtzu is created by the crossing of two breeds: Maltese and Shih Tzu. They are commonly referred to as “designer dogs” and have become popular companions. Sturdy, well-built, and compact, they are agile and lively and exhibit a keen expression and hardy appearance. Read more…

The Moodle is a crossing of two breeds: Maltese and Poodle. They are often referred to as a “designer dog” and have become popular companions and therapy dogs. They are well-proportioned, sporty, and displays a cheerful and lively expression. They are active, agile, and alert. Read more…

The Poochon, is created by the crossing of two breeds: Bichon Frise and Poodle. They are commonly referred to as “designer dogs” and have become popular companions. The ideal Poochon should be robust, well-proportioned, and hardy. They are small in stature, possess a sturdy appearance, and exhibit a sweet expression. They are a Non Shedding breed. Read more…

Breed All About It - Cavalier King Charles Spaniel