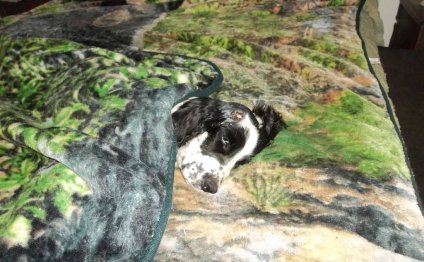 The United States' English Springer Spaniel breed standard states, in its opening paragraph, that Springers are ".a medium-sized sporting dog with a compact body and a docked tail." Breed historians note that Spaniels have been depicted with docked tails since the 16th century.

Springer enthusiasts, both field and conformation, dock tails for utilitarian function and to reinforce the breed's moderate, balanced outline, consistent with proper breed type as defined in the standard.

Conformation, field, and performance English Springers are customarily and routinely docked in the United States. However, English Springers imported to this country from abroad are not. English Springers with natural, undocked tails may be shown according to AKC rules. While an undocked (natural) tail may not be customary in the U.S., it is acceptable. The ESSFTA does request that while it may be a deviation from the standard, it is weighted appropriately and the determination of your awards is by the assimilation of the overall positive characteristics of your exhibits.

The breed standard's description of correct tail carriage - "carried horizontally or slightly elevated" - should be applied when judging both docked and undocked tails. Tails -whether docked or natural - should not be carried more than "horizontally or slightly elevated." English Springers that demonstrate incorrect tail carriage should be faulted.

From the U.S. breed standard:

The tail is carried horizontally or slightly elevated and displays a characteristic lively, merry action, particularly when the dog is on game. A clamped tail (indicating timidity or undependable temperament) is to be faulted, as is a tail carried at a right angle to the backline in Terrier fashion. 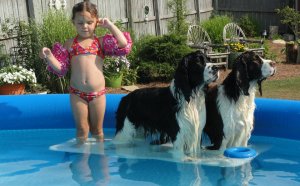 Our pups are AKC with full registration available. The pups will have had their 1st series of vaccinations, been wormed…