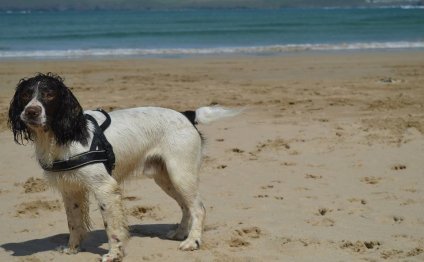 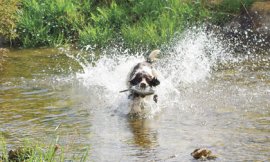 A soothing voice and calm demeanor are key to bringing dogs under control.

David Lisett trains and bonds with dogs much like the legendary Horse Whisperer bonds with horses. Observing Lisett’s springer spaniel training at a clinic he conducted not far from where I live…well, I learned more in three days than I’ve ever learned about anything in my life in three days.

This springer had never seen water before, but it enthusiastically hits the water on the way back with the dummy.

Lisett gained control over spaniels he had never seen before in a veritable heartbeat. He eliminated problems dogs had, effortlessly. He had young puppies straining at the figurative bit to not only retrieve, but to actually “hunt” for the dummy.

In June 2009 a mutual friend had given me Christine Lavier’s name in conjunction with this David Lisett clinic. Lavier was bringing Lisett over from his home base in Scotland in May 2010. 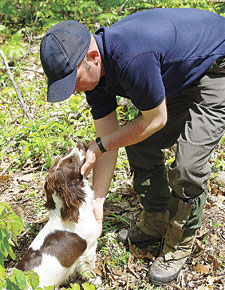 Although I did not know it at the time, I discovered that Lisett is one of the most renowned dog trainers in the entire world–not only in Scotland.

Lavier has 60 acres near Cochranton, , and those acres are groomed for training spaniels. She has her own line of springers (with a lot of English bloodlines), and other springer and cocker fanciers use her training grounds regularly. Again, I didn’t know Lavier before meeting her at the Lisett clinic, other than through our e-mails, but after spending three days with her, I know she and her 60 acres of training grounds definitely require more verbiage. 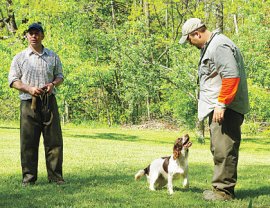 But that’s another story.

Stroking the front of the dog’s chest and using his soft, approving voice, Lisett tells this springer that he has just done something right–perhaps sitting calmly after a retrieve. Eye contact combined with soothing talk–this is the Spaniel Whisperer at work. 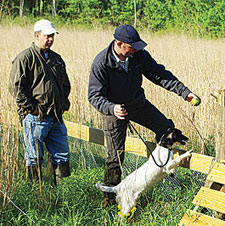 Gentle Guidance
Back to the Lisett clinic. I arrived on a Friday in time for lunch, and I knew I was in the right place when the first couple I sat down with was from Utah. Imagine driving all the way from Utah to Pennsylvania, a dog trailer behind their van, to attend a three-day spaniel clinic!

As if that was not enough, the couple sitting with the Utah folks was from Virginia. They were going to buy a springer pup from Lavier, a pup that would not be born for two more weeks, so they were there to garner tips from Lisett for training their new charge. 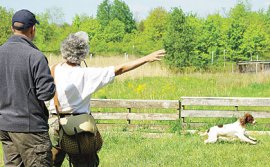 Getting into the nuts and bolts of Lisett’s training methods, I hardly know where to begin. So let me start this way. When one of the spaniels would show too much exuberance–that is, be at least somewhat out of control– Lisett employed a unique hands-on method (gently grasping just the skin of the dog’s throat, no windpipe involved) that also included making eye contact with the dog.

In three days of this and any other Lisett training, I never saw one dog display an iota of pain, nor utter one whimper. I want to emphasize again that this was not harsh treatment in the slightest, but Lisett gained control over each dog almost instantly.