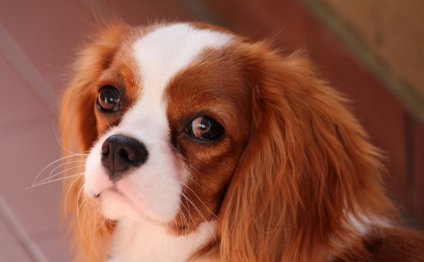 Syringomyelia is a condition whereby fluid filled cavities develop within the spinal cord. Some refer to SM as 'neck scratcher's disease' because scratching in the air near the neck is a common sign.

Syringomyelia is a consequence of an obstruction to cerebrospinal fluid (CSF) flow. In the normal mammal, the CSF around the brain shunts back and forth with the arterial pulse. If this rapid efflux and influx is obstructed then the pressure wave is transmitted down the spinal cord distending it below the blockage.

This condition occurs in many small breeds but is common in the cavalier King Charles spaniel (CKCS) (conservative estimates at least 50% of the breed although only a proportion are severe enough to have clinical signs). It is similar to the human condition Chiari malformation (some vets refer to it as Arnold Chiari syndrome which can be confusing as the original description by Arnold was of syringomyelia associated with spina bifida and this is not the case in the CKCS).

What are the clinical signs of syringomyelia?

By far the most important sign of syringomyelia is pain. This is most commonly localised to the neck region but may be difficult to define or intermittent. Owners often report that their dog is worse at night; when first getting up; during hot or cold temperature extremes; when excited; or related to posture e.g. preferring to sleep with their head elevated. They may seem to be overly sensitive to touch on one side of the neck / ear / shoulder / sternum. In addition some affected dogs scratch at one area of the shoulder, ear, neck or sternum. This is typically one side only, while the dog is moving and sometimes without making skin contact.
Some dogs, more commonly younger patients, develop a scoliosis (twisted spine). Some severe cases may have other neurological deficits such as fore and hindlimb limb weakness and ataxia (wobbliness). Facial nerve paralysis, deafness and seizures have also been associated with the condition but a link has yet to be proven.

What age of dog is affected?

Clinical signs of syringomyelia secondary to occipital hypoplasia are usually recognized between 6 months and 3 years of age. However, dogs of any age may be presented and dogs with more severe disease tend to be presented before two years of age.

Do the signs get worse?

Progression of the disease is very variable. Some dogs have the tendency to scratch with mild pain only and other neurological signs, such as paresis, never or very slowly develop. Others can be severely disabled by pain and neurological deficits within 6 months of the first signs developing. A small syringomyelia may also be found as an incidental finding, with no recognised clinical signs, in the investigation of another neurological disease.

Are there any diseases with similar signs to syringomyelia?

The main diseases to rule out are other causes of neck pain e.g. disc disease (uncommon in dogs less than two years of age); CNS inflammatory diseases and other malformations. If scratching or face rubbing is the main sign then skin disease should be eliminated.

How do I know if my dog has Syringomyelia?

The only way to confirm a diagnosis is by MRI (Magnetic Resonance imaging). This is essentially a picture of the water content of the body presented in a series of slices (like a loaf of bread). Nervous tissue, which contains a lot of water, is not imaged by x-rays but is shown in great detail by MRI. The syringomyelia can be easily visualised as a pocket of fluid within the spinal cord. In severe cases the syrinx is so wide that only a thin rim of spinal cord remains.

If my dog has been diagnosed with Syringomyelia what are the options?

No one can make the decision for you about what is best for your dog.

Long-term studies of medical management of syringomyelia are not available yet. The drugs used to treat syringomyelia can be divided into 3 types:

Pain in mild cases may be controlled by non steroidal anti-inflammatory drugs (NSAIDs) e.g. Rimadyl and Metacam. In more severe cases anticonvulsants, which have a neuromodulatory effect on hyperexcitable damaged nervous system, may be useful, for example gabapentin (Neurontin Pfizer; these are not licenced for dogs). Oral opioids, e.g. pethidine or methadone are also an alternative.