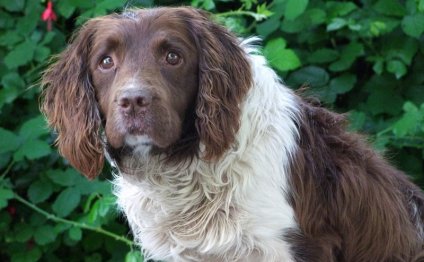 The most common health problems in English Springer Spaniels:

Common orthopedic diseases in English Springers include hip dysplasia, elbow dysplasia, luxating patella, and intervertebral disk disease. The Orthopedic Foundation of America evaluated the hip X-rays of 11, 300 English Springer Spaniels and the elbow X-rays of 781 Springers – 14% of the hips were dysplastic, and 13% of the elbows. Those rates are too high for a medium sized dog, and the true rates are even higher because most of the obviously bad X-rays were not sent in for official evaluation.

The eye disease that causes the most concern in English Springer Spaniels is retinal dysplasia. Other eye diseases include progressive retinal atrophy (PRA) (at 2-6 years old), cataracts (at 1-3 years old), eyelid abnormalities (entropion and ectropion), corneal dystrophy, and glaucoma.

Skin diseases are very common in the English Springer Spaniel, especially allergies (which cause itchy skin and often lead to pyoderma) and seborrhea. Also common are chronic ear infections, due to the long pendulous ears and long hairs inside the ear canals.

An unusual disease called PFK deficiency can occur in English Springer Spaniels, where a dog is born without an important red blood cell enzyme. Since red blood cells carry energy and oxygen to your dog's muscles, this missing enzyme means that during vigorous activity (running, barking, heavy panting), when he needs more red blood cells than usual, a dog with a PFK deficiency suffers sudden episodes of severe weakness. During these breakdown episodes, IV fluids are required. Other than this, most affected Springers can live a normal life as long as you keep them calm and avoid strenuous exercise, over-excitement, barking, and high temperatures. A simple DNA test is available for PFK deficiency, so you can find out at any time whether your dog has the disease, carries the disease, or is completely clear of it.

Epilepsy is a real concern in English Springer Spaniels.

A bizarre neurological/behavioral syndrome known as Rage Syndrome can occur in English Springers, where an affected dog suddenly becomes violently aggressive. In many Springer Spaniels, it appears to be related to extreme dominance, where the dog believes that he is in charge of the household and somebody in the family does something that "challenges" his leadership and causes him to explode. However, other affected Springers are good-natured and well-behaved right up until the moment they flare out of control. Some affected Springers have abnormally low amounts of serotonin (a calming brain chemical). Whatever the cause, drugs and behavioral modification seldom work and euthanasia is often the only thing you can do.

Note that Springer Spaniels who are poorly bred, poorly socialized, or poorly trained can display dominance or aggression without it being Rage Syndrome. In these cases, behavior modification CAN often bring the dog under control. Also note that epilepsy can cause behavioral abnormalities, and since epilepsy can be controlled with medication, it's important to consider epilepsy as a possible cause whenever an English Springer Spaniel displays sudden aggression.

Hormonal/endocrine system diseases include hypothyroidism, Addison's disease, and diabetes. According to the Michigan State University Thyroid Database, up to 14% of English Springer Spaniels have low thyroid levels.

Can you prevent health problems from happening to YOUR English Springer Spaniel?

Yes, often you can.

Based on your dog's breed and how you're raising him, this personalized quiz will help you understand how long your dog might live – and most importantly, how you can increase his life expectancy.

Read my advice on daily health care so your English Springer Spaniel lives a long, healthy life and seldom needs to see the vet.

The best diet for feeding your English Springer Spaniel is real food. Real chicken, turkey, beef, bison, venison, fish.This is not "people food" and I'll tell you why.

If you can't feed homemade dog food, here are your next-best choices.

Is your veterinarian really the best choice for your dog? Learn about the differences between vets who practice conventional, holistic, and alternative veterinary medicine.

Advantages and disadvantages of spaying your female English Springer Spaniel.

Advantages and disadvantages of neutering your male dog.

Does your dog suffer from arthritis, hip dysplasia, disk disease, pancreatitis, colitis, injuries such as fractures and skin wounds, or a neurological condition? An honest review of a veterinary device you can use at home to help reduce inflammation and pain.

Welcome to the ESSFTA Breeder Education and Referral Page. If you re interested in getting an English Springer Spaniel, we… 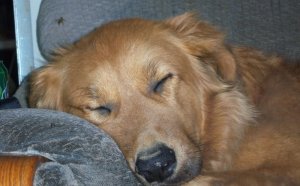 Research the different breeds of water dogs. There are many dogs suitable for hunting waterfowl. Some of the most popular…