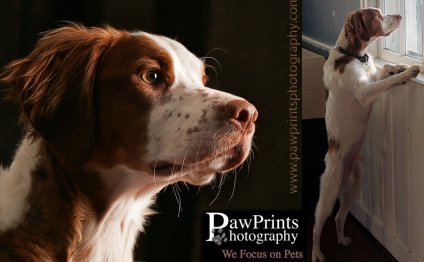 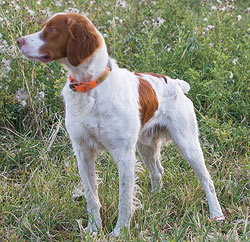 The ubiquitous Brittany is popular for good reason.

For basketball fans, the Brittany would be a point guard, able to do most anything in a game–maybe not slam dunk like a pointer or rebound like a setter, but able to create havoc in a variety of ways. After all, they’re versatile both by definition and by inclination.

If Brittanys have carried anything genetically from their origins as a poacher’s dog, it is to hunt whatever looks like game and also to relish lying by the fire, looking as inconspicuous as a dust bunny.

The Brittany in its original package was the small dog overlooked by the irate game warden because it didn’t look like a hound and didn’t even look like a bird dog. Never mind that the poacher’s hideaway contained a slew of pheasants, rabbits and other game creatures whose ultimate fate had been assisted by the little dog.

My Brittanys are foremost gamebird aficionados, but give them a bounding cottontail or a fleeting squirrel or even deer on the hoof and they are inclined to be off to the chase. This is considered heresy by those who cherish pointers or setters, but hey, who’s to argue with a hundred generations or more of versatility?

Brittanys (in Europe and Canada they still are Brittany spaniels, but in the United States we have dropped the “spaniel”) are of French origin, logically enough from the province of Brittany, which juts into the Atlantic Ocean like Charles DeGaulle’s nose.

All sporting dogs are a mixture of breeds, and the Brittany is no exception. Current theory is that pointers and spaniels got together to create the modern Brittany, although other sources say it was a spaniel-setter mix. Illustrations from the 1600s show a dog similar in appearance to the Brit. But it was the mid-1800s before the first dogs appeared that could reliably be called Brittanys. 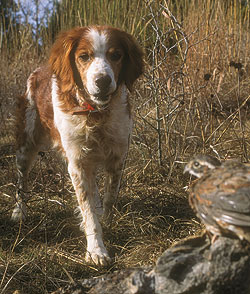 A Frenchman from the town of Pontou came up with two tail-less puppies from a cross between his dog and a visiting Englishman’s dog. Today the tail-less Brittany is standard, but most puppies have their tails docked along with clipped dewclaws a day or so after birth. The first French breed recognition was in 1907, but it wasn’t until 1934, the year I was born, that the American Kennel Club recognized the Brittany spaniel as a distinct breed. (The AKC dropped the “spaniel” from the name in 1982.)

In the interests of full disclosure, I’ve been a Brittany man exclusively for 40 years, first with American Brittanys, then with French Brittanys. Technically, they’re all French because that’s where they originated, but the two have diverged in interesting ways over the 90 years since the first Brits came to the United States.

Research indicates the ancestor of the Brit was a French spaniel that was both short-tailed and black or liver-coated, but history that far back is hazy and questionable.

To make another generalization, French Brits tend to work closer because they’re bred to hunt with a walking hunter, while American Brits range wider, often in field trials with horse-mounted hunters. We’ve had two exceptionally wide-ranging Brits over the years. One was an American Brit, the other a French. So much for generalization. Both ran with the pointers and all too often tried to fly with the birds.

The AKC ( is of mixed feelings about any French-American differences, kind of like many humans in general. Any purebred Brittany can be AKC registered, but AKC does not recognize black and white or tri-colors for bench shows. The French have recognized black as a Brittany color for more than 50 years.

Once a prospective puppy buyer asked me if it was true that black and white Brits had better noses than other color combinations. Because we had several black and white puppies for sale, I had a golden opportunity to jack up the price, but I resisted the temptation and no doubt will go directly to Heaven (or, as Will Rogers is alleged to have said, “If dogs don’t go to Heaven, I want to go where they go”).

In the field, color doesn’t make any difference, either for hunting or field trials. Brits are the only pointing spaniel, but since they now aren’t classed as spaniels by Yankees, that distinction doesn’t mean much anymore. While the AKC registers all of them only as “Brittany, ” the United Kennel Club has distinguished between French and American Brittanies since 1992. 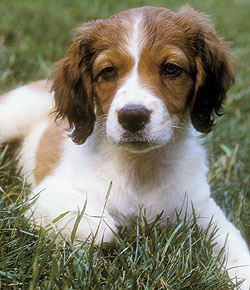 AKC is the best-known registry, but there are others. AKC actually began in 1884 as a registry for sporting dogs (the Club’s symbol is a pointer). Other registries include the United Kennel Club (1898) and the Canadian Kennel Club ( CKC dates to 1888. The American Field Registry is the oldest of all, dating to 1874.

The “ideal” Brit is between 17 and 20.5 inches at the withers, and between 35 and 50 pounds. We’ve had dogs that failed to conform either to the size or the weight. A couple topped the maximum without being overweight, and they happen to have been the best hunters of all, so while standards are useful to establish a breed description, they don’t dictate ability in the field.

My first three Brittanys were American, two orange and white, one liver and white. Then Dave Follansbee, the first editor of this magazine, turned me on to the French dogs after my American Brit was killed by a car (Brittanys, I’m convinced, have a death wish when it comes to traffic).

His Calembour line was the first well-known one in this country and still is a dominant bloodline in French Brittany circles. All our dogs since Guff, the first, have had Calembour blood in them. Once there were only a few French breeders in this country; now, there are many, along with two different French Brit clubs.

The Brittany is the only spaniel that points.

Brittanys are susceptible to hip dysplasia, a reason for buying puppies only from breeders whose parent dogs have been OFA- (Orthopedic Foundation for Animals) or Penn-Hipp certified. We did one breeding while waiting for Molly’s certification with a young dog from Kansas who also had just been X-rayed. It turned out both dogs failed their OFA certification, and we did not sell any of the pups.

The three youngsters we kept all are healthy with no signs of dysplasia, but it could crop up in their later years.

While Labs and golden retrievers currently blow all other sporting dog breeds out of the water when it comes to popularity, Brits have gone from being a curiosity a half-century ago to the leader among AKC pointing breed registrations.

Any bird dog can hunt gamebirds–it’s what they do. But some are specialized and others are generalists. Brittanys fall into the versatile dog category. If you want to find quail, a pointer is the standard, especially where speed and range are required. But for thick cover hunting, especially for grouse and woodcock, Brittanys are ideal.

Piper: An American Brittany Spaniel puppy at the park ... 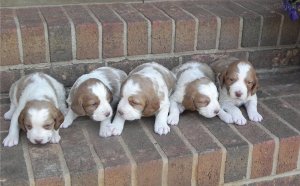 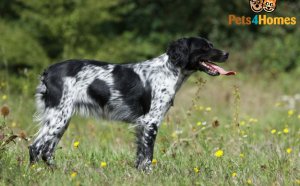 The Brittany is named after its country of origin – Brittany, or Breton, in the north west area of France. First identified…