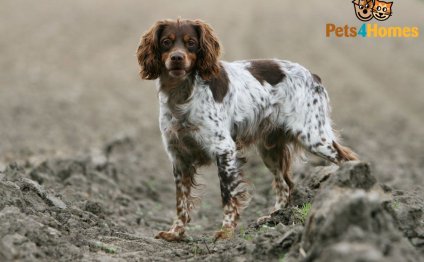 The Brittany is named after its country of origin – Brittany, or Breton, in the north west area of France. First identified in the mid 1800’s, it was popular subject for paintings and tapestries of that era. There are no records of this breeds development still in existence, so its history is largely unknown. However, it bears a strong resemblance to the Welsh Springer Spaniel, which suggests that they may have common ancestry.

These dogs were widely used for bird hunting. They would point to the bird, then lie down still so the hunter could cast his net over both the dog and the bird. They found their way to the United States in 1931, and were welcomed into the AKC breed registry in 1934.

Until 1982, the Brittany was known as the Brittany Spaniel. The name was changed because its style of hunting is more like a pointer, rather than a spaniel. It has been very popular amongst dog enthusiasts in the United States for its hunting ability, agility and friendly, personable nature.

The Brittany is a compact, medium sized dog with floppy ears, a medium length coat, and a natural bob tail. If they do happen to be born with a tail, it is docked to a length of 4 inches. As adults, they reach a height of 20 inches (53cm) and weigh in at around 50lb, or 18kg.

This is a highly energetic breed, with a loving affectionate nature. They are definitely people dogs; because they were developed to work alongside their owner, they want to be with them as much as possible. The Brittany learns quickly and they are keen to please their owner. They may be sensitive, in that a loud voice or harsh correction can frighten them. Most Brittany fanciers will agree that a frown and stern look is enough to keep their dog in line.

This breed is very exuberant, enthusiastic and joyful, which can be fun to live with. However, they can be uncontrollable, and may knock small children over. This tends to occur when they don’t get enough exercise to burn off their excess energy, and they don’t get the mental stimulation that their clever mind needs.

If it sounds like the Brittany may not be the best guard dog, then you are right. These dogs will let you know if a stranger approaches, but will then try to make friends with them. Their hunting instincts mean that they have a tendency to wander, so good fencing is a must.

These dogs are generally robust and healthy, however there are some instances of hip dysplasia in the breed. Careful selection of breeding stock will help to reduce this. Before you buy your Brittany puppy, ask the breeders for the results of any tests that were performed on the pup’s parents.

Some individuals in the breed have suffered from epilepsy, and they may also develop glaucoma. This is an increase in pressure inside the eye that can lead to permanent blindness.

The Brittany is mentioned as one of the breeds that are more susceptible to discoid lupus erythematosus. In this condition, a dog’s immune system attacks the basal layer of their skin cells, leading to scaling and pigment loss, particularly on the nose. The lesions can spread to the lips and adjacent skin, and may become ulcerated and infected. Treatment involves corticosteroid cream, which suppresses the immune system enough to allow the skin to heal, accompanied by antibiotics, fatty acid supplements and the regular use of sunscreen. This condition will need to be treated for the rest of the dog’s life, but it can be well controlled with medication, and shouldn’t cause too many problems.

Brittanys are easy dogs to look after, when it comes to coat care. Their only need brushing once or twice a week, especially if they have been out in bushy terrain and have grass seeds in their coat. Similarly, check their ears and give them a gentle wipe out to remove dirt, and prevent infection. These dogs do shed a reasonable amount, so be prepared to sweep up excess dog hair regularly.

The most challenging part of looking after a Brittany is meeting their need for physical and mental exercise. They must have a good run or walk every day, and regular training to keep their mind stimulated. If they don’t get this, then they can become destructive, and develop other behavioral problems such as digging and barking. It’s not fair to invite this breed to join your family unless you are prepared to put the effort into meeting their need for activity.

The Brittany is a popular breed, and are particularly suited to families with active sporty lifestyles. They enjoy hunting, as well as obedience and agility. These activities give them a job to do, and keep them thinking. They are wonderful children’s companions, and will run and play with them for hours. However, their boisterous nature may knock children over, so they do need supervision when they are in the company of youngsters. 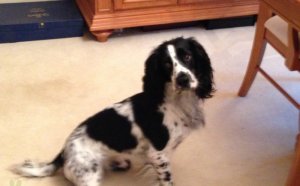 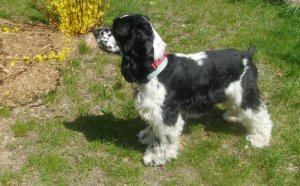 Clover is as sweet as her Cocker Spaniel mommy. She is almost a year old now. Clover lives with her new mother Leah up in…