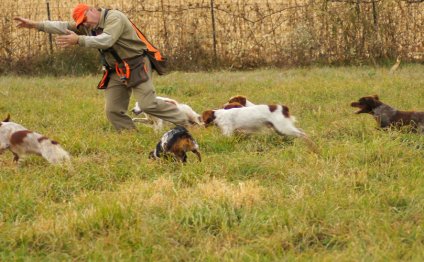 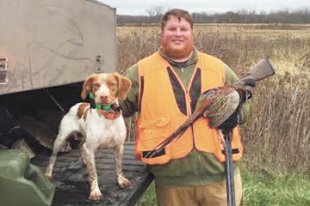 Sportsmen often find one or two specific niches for which they develop a sincere, lifelong passion. One such niche is upland hunting with bird dogs — a sport that devotees would describe as a pleasurable obsession, or maybe even an addiction.

Recollecting a tremendous day’s hunt with his bird dogs, Sage and Abbie, famed television journalist Tom Brokaw once reflected on his life, “I’ve interviewed presidents and royalty, rock stars and movie stars, famous generals and captains of industry. I’ve had front rows seats at Super Bowls, World Series, and Olympic Games; my books have been on best-seller lists, and my marriage is a long running success. That day with Sage and Abbie is right up there when I come to reckon, ‘How did one guy get so lucky?’”

And popular Western writer Tom McGuane says that for him, “The dogs are everything, and they want to hunt, too. Bird dogs plead with you to imagine the great things you could be doing together. Their delight is a lesson in the bliss of living.”

Closer to home, Eric Sarakaitis, of Johnstown, is a man who loves the act of bird hunting, but appreciates the artful beauty of working bird dogs even more. For him, the dogs really are everything.

“For me, it is more about watching the dog work and rewarding the dog for a good point by shooting the bird. Walking up to a dog that is on point is the most intimate moment in the woods or field I have experienced. There is a time when I am so focused and in tune with the dog, that I can’t hear or see anything beyond the dog on point, knowing that what is about to happen is going to be special. There is such great anticipation and excitement about the sound of the flush and the concealed bird exploding up off the ground, ” Sarakaitis said.

Sarakaitis hunts over Brittany Spaniels, preferring their cooperative nature and the pleasurable addition they are to his household.

“I have four Brittanies — two males, Diesel and Captain, and two females, Addie and Bella —and they are true companions first, and a hunting tool second, ” he said.

As an illustration of his love for these dogs and his hunting interests, a large portion of his property has been set aside for his animal cohorts. Sarakaitis has created an impressive facility to train and exercise his dogs.

“I have two acres fenced with no-climb horse fence. A little less than half of it is wooded, which provides great opportunities to train for grouse and woodcock. I can set up training scenarios with dense wooded cover, which is difficult to do in most training areas. Not only does it give them a good training environment, but it is also a safe, secure playpen for them. They have a lot of area to run and exercise and stay healthy for hunting season, ” Sarakaitis said.

Within this fenced run, Eric also has a bird pen he uses for the raising and day-to-day storage of training fowl. The birds are housed in a four-by-four-by-eight-foot “Johnny House” with a connected four-by-eight-foot raised flight pen on the outside.

“At any given time, I’ll have chukar, quail, and ideally pigeons — because they’re the most hardy — in my pen. These birds are used in all aspects of training, from teaching a dog to use its nose to scent mark the location of birds, steadying to point, and retrieving after the shot. During training, I employ the use of bird launchers, which is a mechanical apparatus with a remote release that launches the birds into flight. This allows me to release the birds at will and helps me when teaching obedience, commands, and such when I’m working with a dog, ” he said.

Eric begins to work with his bird dogs at a very young age, introducing them to quail from his bird pen as soon as they can run and see. He said that from the owner’s/trainer’s standpoint it is good to create a strong bond and understanding with one’s canine companion when they are still pups.

“You are training them to hunt at the same time you are teaching them to listen, ” he said.

However, Sarakaitis does not do all of the training of the dogs by himself. He elicits the help of his other dogs as well.

“It is good to have more than one bird dog for training — 90% of my pups’ manners and learning how to be hunting dogs are taught by their peers, ” he said. “When training, you want to substantiate prey drive first, and then leverage that prey drive for further training in regard to pointing, steadying, introduction to the gun, and obedience. All that being said, in my experience, most dogs are ready for exposure to wild birds anywhere from six months of age to a year old. But that does not imply that their training and learning is finished.”

Sarakaitis takes an annual autumn pilgrimage northward to Michigan to hunt grouse and woodcock. Due to dramatically diminishing grouse numbers in this state, he primarily hunts for pheasant and woodcock here in Ohio. He also does some dove hunting in the early fall, and brings a couple of his dogs with him on these excursions to retrieve downed birds.

“Brittanies are not known to be strong retrievers but mine do well with it. For whatever reason, two of my dogs are absolutely phenomenal at retrieving doves, ” he said.

What Brittanies are known for is their relentless, “all business” attitude when released into the field and their keen sense of smell that will bring them to a tense, motionless stand-still when they detect a game bird hidden in a mat of dense cover. When hunting for pheasant throughout central and south-central Ohio, Sarakaitis and his dogs have a set method of operation to bag the birds. 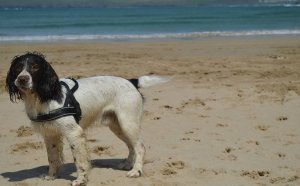 A soothing voice and calm demeanor are key to bringing dogs under control. By Nick Sisley David Lisett trains and bonds with… 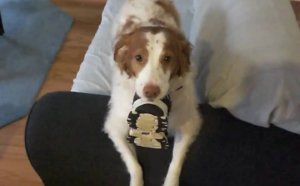