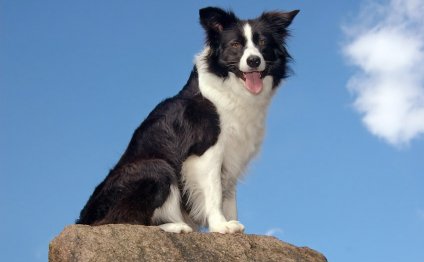 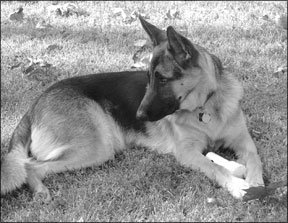 Why you should (and how you can) cure your dog's obsessive-compulsive disorder.

You’ve probably heard about people who wash their hands repeatedly until the skin wears off, who pull out their hair until they’re bald, or return home, time after time after time, to make sure the stove is turned off. These are obsessive-compulsive disorders (OCDs).

Sad to say, OCD behaviors aren’t confined to humans; dogs get them, too. Oh, you won’t see your dog worrying about whether the stove was left on, nor will you catch him washing his paws repeatedly in the sink. Dogs have a whole set of potential OCDs all their own, specific to canine behavior. Canine OCDs are just as capable of destroying a dog’s ability to function as human OCDs are capable of affecting human lives.

German Shepherd Dogs are prone to a number of OCD behaviors, including tailchasing, licking themselves until sores develop, and fly-snapping. This dog is so distracted by an imaginary fly that he stops playing with a real toy!

What is OCD?
MedicineNet.com says this about OCDs:

“OCD is a psychiatric disorder characterized by obsessive thoughts and compulsive actions, such as cleaning, checking, counting, or hoarding. One of the anxiety disorders, OCD is a potentially disabling condition that can persist throughout a person’s life. The individual who suffers from OCD becomes trapped in a pattern of repetitive thoughts and behaviors that are senseless and distressing but extremely difficult to overcome. OCD occurs in a spectrum from mild to severe, but if severe and left untreated, can destroy a person’s capacity to function at work, at school, or even in the home.” 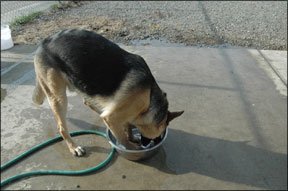 The last thing you want is for your dog to develop an OCD. The more you know about them, the better armed you are to prevent OCDs, and the better able to recognize and take action sooner rather than later - a critically important element of a successful behavior modification program for OCDs.

The same GSD sometimes displays a bit of a drinking problem. He gets so preoccupied with snapping and pawing at his water, that he fails to drink! Then, still thirsty, hell whine for more water.

An “obsessive” debate
There is some disagreement among animal behavior professionals about applying the term “obsessive” to canine behavior. The “anti-s” declare that the term “obsessive” refers to the dog’s thoughts, and because we can never really know what a dog is thinking, it’s therefore inappropriate to use the term in reference to dog behavior; we should simply call it “Canine Compulsive Disorder.” The word “compulsive” refers to the dog’s actions, which we can clearly see, so it’s okay to use that term in relation to dogs.

Those who favor using the term “obsessive” argue that we know a dog’s brain is similar in many ways to a human’s, albeit with a smaller cortex, and the observed compulsive behavior patterns are so similar to human OCDs that it only makes sense to call it obsessive, even with regard to dogs. A growing number of behavior professionals share this opinion - as do I - and so “Obsessive Compulsive Disorder” is becoming an increasingly used term in dog behavior work. 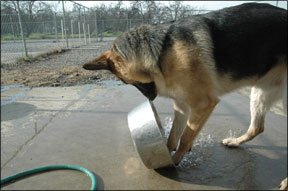 Noted veterinary behaviorist Dr. Karen Overall suggests that as much as two to three percent of our canine population may be afflicted with OCD. She also identifies it as one of the most difficult canine behavioral disorders to successfully treat, and emphasizes that genetic, environmental, and neurochemical/neurophysiological elements all come into play.

Certain breeds have a clear genetic propensity for specific OCDs. Cavalier King Charles Spaniels are prone to fly-snapping, and shadow-and light-chasing; Doberman Pinschers tend to flank-sucking and self-mutilation from licking; a high percentage of Golden and Labrador Retrievers seem to suffer from pica (eating inappropriate objects); and several of the herding breeds are likely to demonstrate OCD spinning and tail-chasing behaviors (see “OCDs and Breed Predispositions, ” next page). It’s a good idea to research your own breed thoroughly, so you can be especially watchful for telltale signs of any that may plague your breed.

In addition to the genetic component of OCD behavior, environment plays a significant role. OCDs most often emerge in young dogs, between 6 to 12 months, in dogs who have a genetic predisposition to the behavior, when subjected to environmental stressors that trigger the onset of the behavior. Dogs who may be genetically prone to a behavior may dodge the OCD bullet if they avoid being significantly stressed during this period. Or maybe not.

Early signs
The early sign of any OCD is the occasional performance of a behavior out of context. It’s normal for a dog to chase a real fly; it’s not normal for him to start snapping at things in the air that you can’t see. Because well-practiced OCDs are heartbreakingly difficult to modify, it’s critically important to identify and modify OCD behavior in its early stages.

I’ve had two different clients who had dogs with fly-snapping behavior. One was a Bernese Mountain Dog, the other a Cavalier King Charles Spaniel. Both are on the list of breeds at high risk for this behavior. The Berner’s owners, already Peaceable Paws clients, identified the behavior at its onset and we immediately took appropriate steps to modify the behavior. Leo eventually stopped snapping at imaginary flies. The Cav’s owners also identified the behavior at onset and contacted the breeder, who told them, “Oh, some Cavs just do that. His sire and several of his littermates do it, too.”