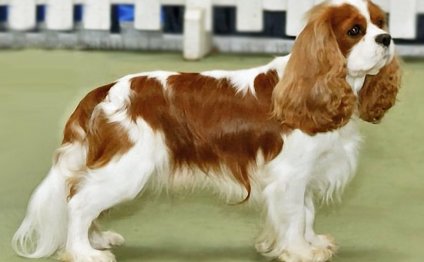 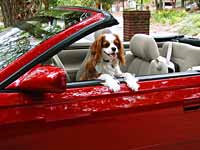 The best part about owning a Cavalier King Charles Spaniel is having fun together. Make your Cavalier Spaniel your constant companion and take him with you whereve you go!

Playtime with your Pet

It's the easiest thing in the world to have fun with your Cavalier King Charles Spaniel. The Cavalier Spaniel breed has plenty of energy, intelligence and a healthy dose of curiosity - all the makings of a great playmate.

Cavalier King Charles Spaniels are adventurous. Bentley likes nothing better than to get out of the house and explore the neighborhood. He loves to smell new smells, meet new people and sniff his favorite puppy pals. Bentley loves just to chase the leaves that blow down the street!
A few words of caution. Always keep your pet on a leash. First of all, it's required by law in most communities. Secondly, you don't want to run the risk that your Cavalier King Charles Spaniel will get loose and be hurt. Bentley would blindly run across the street to chase a squirrel any day!

Next, when your Cavalier King Charles Spaniel puppy is small, be careful about the other dogs you meet. Until your pet has had all his vaccinations (at about 6 months old), you want to ensure that he doesn't contract anything from another dog. Avoid taking a very young puppy with you to a pet store where you will likely meet other dogs that you can't be sure have been properly vaccinated. 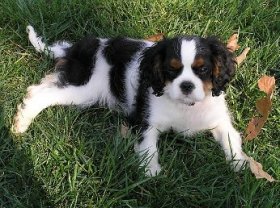 How far can you walk with your Cavalier King Charels Spaniel? Farther than you think! Veterinarian, Dr. Joseph Bonaquisiti, takes 10 mile hikes with his Cavalier! But you want to work up your Cavalier Spaniel's stamina gradually over time, if you're interested in long distances. Watch your pet to be sure he doesn't get over-heated or over-exposed to the sun. (Yes, dogs get heat-stroke, too!) Carry a water bottle for your companion and take a rest in the shade if your Cavalier King Charles Spaniel is panting or slowing down.

The key word in "Cavalier King Charles Spaniel" is spaniel. This breed seems to have the traits you'd expect from a sporting dog. Bentley never had to be "taught" to play fetch. It's was instinctual that if he brought the ball back, someone would throw it for him again!

What to throw? Almost anything! Your Cavalier King Charles Spaniel will happily chase balls, sticks, frisbees and toys of any kind. Just make sure you don't throw anything that would hurt your pet's mouth. (Rocks are not a good choice.)

Cavalier King Charles Spaniel puppies are so small that a tennis ball is probably too big for them to retrieve. If you can't find a smaller rubber ball to play with, try a rope toy or small stuffed toy. Keep the tennis balls until your Cavalier Spaniel is full grown. 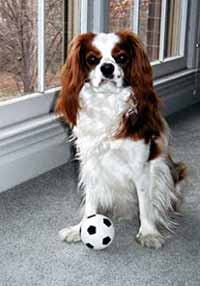 Try an over-sized ball, like a beach or basketball. You'll laugh till you cry watching your Cavalier King Charles Spaniel attempt to control a ball that is several times bigger than he is!

Cavalier King Charles Spaniel puppies wrestle with their littermates, so your pet will occasionally enjoy tussling with you, too! Start off gently, and be sure to teach your puppy a few words that will help you maintain control of the play. For example, rather than saying a generic "No!" when you want to stop wrestling with your pet, try saying "Enough" or "Settle Down" to let him know that the game is over.

Here, too, it is helpful to remain in control of the game. Don't allow your Cavalier King Charles Spaniel to pull on just anything. Restrict Tug-of-war games to designated toys. If your pet begins to tug on the furniture, for example, you will want to quickly correct the behavior and give him an "acceptable" toy.

Tug-of-War is one of Bentley's favorite games. He even plays it by himself!

Lindsey tied an elastic bunji cord to the deck railing. Bentley pulls the cord and the elastic cord pulls back! Hours of solo fun!


It's helpful to teach your Cavalier King Charles Spaniel the "drop" command. Occasionally, when you're playing Tug-of-War with your pet, say "Drop!" and remove the toy from his mouth until he learns that he is supposed to stop playing and relinquish the toy on command. Reward your dog for dropping on command by throwing the toy so he can fetch it. 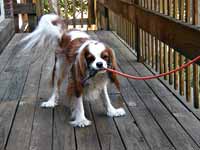 One other note about wrestling with your Cavalier Spaniel. It is natural for puppies to grab you with their mouths. But there is a difference between "mouthing" and "biting." It's okay for your puppy to grab your hands with his teeth when you're wrestling, but if he bares down too hard, you should snatch your hand away quickly and yell "Ouch!" loudly. This will startle your puppy and make it clear than he was being too rough. Teach your pet the boundaries early, before he becomes an adult dog that may be more difficult to control.

Buy a bottle of children's soap bubbles from your local drug store and prepare for hours of fun, watching your pet try to burst the bubbles by jumping up to "catch" them in his mouth!

He sits below the shelf where the bottle of bubbles is kept and whines pitifully until someone agrees to blow bubbles for him!


By the way, if you don't mind soap bubbles inside your house, this is a great game for an elderly person or someone confined to a wheelchair to play with your dog. Your Cavalier King Charles will do all the work as long as you have breath to blow bubbles!
You don't have to spend a lot of money buying toys at the local pet store to keep your pet happily entertained. Instead of buying a rope toy from the pet store, take an old sock, tie a knot in it and throw it for your puppy. He'll love it!

If you have any empty plastic containers (pill bottles, food containers, shampoo bottles, etc.), wash them thoroughly, remove any labels, and place a penny inside them to make a homemade rattle.

Bentley adores plastic containers and creates quite a racket chasing them all over the house! (Note: keep an eye on these homemade rattles. If your Cavalier King Charles Spaniel begins to chew through the container, take the toy away from him. You don't want your pet to swallow any bits of plastic.)

How about spending some time in the kitchen making homemade dog biscuits for your favorite friend? You can find lots of free recipes for dog treats on the internet, but here's one taken from Dog Fancy Magazine (February 1999) to get you started:

Combine carrots, eggs and garlic. Mix until smooth. Add dry ingredients. Roll out on heavily floured surface and cut into bars or desired shapes. Bake at 300 degrees for 45 minutes or to desired crunchiness. The centers will continue to harden as they cool. Brush with egg white before baking for a glossy finish.