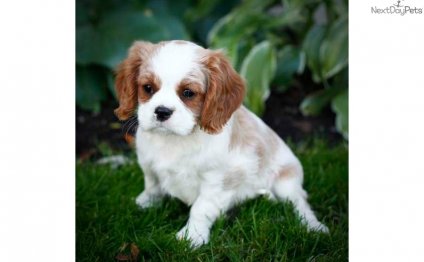 Named for King Charles II, Cavalier King Charles spaniels originally descended from the King Charles spaniel, but grew to be smaller in size than their predecessors. Dog lovers looking for a mostly indoor dog that still loves the outdoors often select the Cavalier because his size makes him good for small homes, but his spaniel personality still allows him to go out and play. The American Kennel Club as well as the Cavalier King Charles Spaniel Club provide a breed standard stating how large - both in weight and size - your puppy will become once he is full grown.

Standard Cavalier height is between 12 and 13 inches tall, and the breed's average weight varies between 10 and 18 pounds. Generally, female cavalier puppies stop growing in physical size and height at around 18 months, and male puppies can take up to around two years. Some dogs can grow "lankier" than others, a condition that can be altered by providing your dog with more muscle growth through regular exercise. The lifespan of a typical Cavalier is nine to 14 years, and so your Cavalier puppy will reach full physical growth before most of his adult life.

Like all dogs, Cavaliers require exercise. Because they are small, they do not require a large yard space, but their personalities will make them want to play with their human families, especially as puppies. Exercising your Cavalier while he is a puppy will allow his muscles to stretch and develop in order to reach his full potential height and a steady, healthy weight. Additionally, regular brushing, bathing and occasional hair trimming will help your dog's coat stay healthy and in turn keep him feeling good enough to exercise and grow.