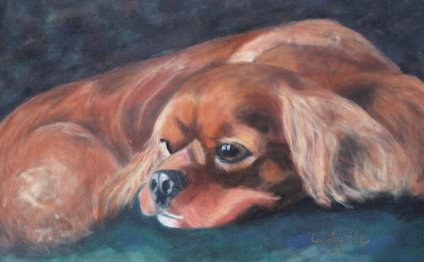 The Cavalier King Charles Spaniel has gentle, sweet, and easy to please temperament. An affectionate, nonaggressive breed that is friendly with other dogs, pets, and strangers. 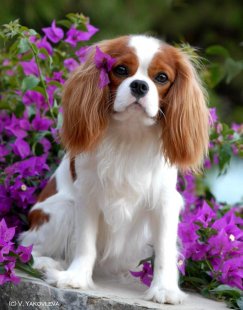 A success story of recent years, the friendly, affable and energetic Cavalier has become very popular.
In many ways it is an ideal urban canine companion, willing to curl up on a sofa in bad weather, but equally willing to walk and run for miles.

The Cavalier King Charles Spaniel, a descendant of European toy Spaniels, was a pet of aristocratic families during Tudor times. In the 1700s, King Charles II favored it so much it was given its royal name. The breed changed over the years until the 1920s, when an American fancier generated enough breeder interest to revive the original spaniel. The first Cavaliers were sent to America in 1952, but the AKC didn’t recognize the breed until 1996.

His energy level is medium.

In the 1920s, an American, Roswell Eldridge, offered prize money at Crufts Dog Show in London to anyone exhibiting King Charles Spaniels with long noses, as depicted in Van Dycks painting of King Charles II and his spaniels. By the 1940s, these dogs were classified as a unique breed and given the prefix Cavalier, to set them apart from their forebears.

Unfortunately, the breeds growing popularity has led intensive in-breeding, which has contributed to an overwhelming increase in lethal heart conditions. The consequence is that life expectancy of affected dogs is reduced from 14 to only a 10 or 11 years. This is perhaps the highest incidence of any serious inherited disease in any breed. When selecting one of these dogs, it is extremely important to check the medical history of several previous generations.