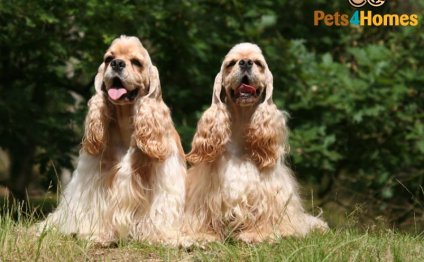 Cocker Spaniels are renowned for being great dogs to have around. They have such wonderfully kind natures and tend to act like real clowns and for decades these charming canines have been popular family pets and working dogs. There are many types of spaniel around, but the most well known has to be the Cocker although, the American Spaniel is a very similar dog. So what's the difference between the two breeds?

English Cocker Spaniels are that little bit bigger than their American cousins, but the most striking thing about the two, is in the shapes of their heads. American Cocker Spaniels have much more pronounced dome shape skulls and their faces are different too because they boast nicely defined and very distinct eyebrows over large, round eyes that face more to the front. English Cockers have shorter backs which makes them more compact looking canines than the American Cocker too.

Another quite striking difference is that the American Cocker's lips have a tendency to hang down more than those of the English Cocker. When it comes to coats, the American Cocker tends to be thicker and denser than their English cousins although both are lovely and silky in texture.

Although the breeds do look quite similar, they are classified as being two very different breeds of dog. In their native USA, the American Cocker is simply referred to as a Cocker Spaniel, it is only in other parts of the world that the prefix “American” is used to distinguish between the two breeds.

The two breeds boast quite different natures with the American Cocker spaniel having far less of a prey drive than that of their English cousins. The reason being that the American Cocker has lost their instinct to hunt and is quite happy being a family pet and companion. They are the perfect choice for people who live in towns and who do not spend lots of time in the great outdoors.

English Cocker Spaniels on the other hand are very busy little characters and they need to be kept mentally stimulated for them to be truly happy dogs. If they are left to their own devices for great lengths of time or are not given the right amount of exercise on a daily basis, English Cockers can become quite a handful and develop all sorts of behavioural problems.

With this said, English Cocker spaniels, make wonderful family pets, it's just that they need a lot more in the way of exercise than the American Cocker. As long as they are allowed to do what they instinctively do best, which is to run around in the great outdoors following their noses, the English Cocker is a wonderful choice as a family pet too.

American Cocker Spaniels stand at anything from 14 to 15 inches at the shoulder and they weigh in at around 24 to 28 lbs. They are compact, sturdy looking dogs that boast a fine and very silky coat which can either be wavy or flat and medium in length which has quite a dense undercoat.

These lovely dogs can be any solid colour or particoloured coat and these can be with or without any markings in them. They can also have white markings on their throats and chests. American Cockers have gorgeous round eyes that face more to the front with very defined eyebrows and they have gorgeous pendulous ears that are covered in silky, long hair.

To look at, the American Cocker Spaniel is athletic although quite compact and squarely built. They have a very soft, laid-back and appealing look about although they are very alert dogs.

English Cocker Spaniels are glorious looking dogs that stand anything from 15 to 17 inches tall at their shoulders. They are heavier than their American cousins weighing in at anything between 26 to 34 lbs and they are strong, solidly built dogs that boast a robust bone structure.

The hair on their heads is fine and short. Their coat can be either flat or it can be very slightly wavy, but as in the American Cocker, these are lovely and silky to the touch. English Cockers can have solid coloured coats with some dogs boasting markings whereas others do not or they can be particoloured and again, these can be with or without any markings on both their throats and chests.

If you are thinking about sharing your home with a Cocker Spaniel, but do not spend a lot of time in the great outdoors preferring to spend more time indoors, you might be better off choosing an American Cocker because they don't have the same prey drive as that of the English Cocker Spaniel. However, if you love being outside and spend as much of your free time exploring the countryside and different parks, an English Cocker might be the perfect spaniel for you because these active little characters like nothing more than being outside following their noses.