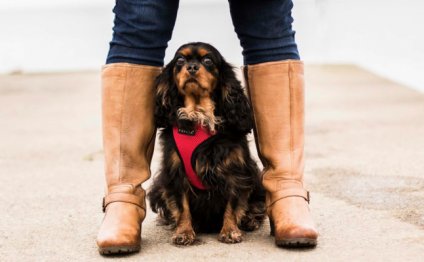 Special needs teacher Catherine Southwell will never forget the horror of the sight which greeted her when she offered to help rescue nine Cavalier King Charles spaniels seized from a Northern Ireland puppy farm.

The emaciated animals were in such a severe state of neglect and so badly matted after being starved and left to lie in their own filth that it was impossible to tell which end was their head and which their tail.

That was a year and a half ago and from those first nine desperately deprived dogs Catherine has now helped rescue over 260 neglected and ill-treated Cavaliers, mostly from puppy farms all over Ireland.

Her shocking introduction to the extent of animal cruelty and neglect here led Catherine to launch the voluntary organisation Cavaliers in Need which now takes up every hour of her spare time and which she runs with the help of a team of dedicated volunteers and 30 foster families.

Catherine, who is married to IT manager Nicholas (40) and has one daughter Amy (21), is so passionate about Cavalier dogs that she and her family now share their neat Lurgan home with 18 of the pets.

In fact, their house has been deliberately designed inside with their extended family of dogs in mind and even has a doggy toilet in the garden.

In the past week alone, Catherine has rescued 20 Cavaliers.

Almost every dog taken into the care of Cavaliers in Need requires urgent medical attention so that to date vet bills alone have run to over £20, 000.

Catherine explains where it all began: "I've always loved Cavaliers and the rescue service came about by accident in June 2013 when a friend rang me to see if I would take a dog that had been found in Co Antrim. It was in a very bad way with an open neck wound and was also malnourished.

"When I took the dog to the vet it had a chip and it turned out to be from a puppy farm.

"We couldn't get in touch with the owner so we contacted the local council and then they went to see the owner to tell him we had his dog.

"The council staff were so horrified by what they saw at the puppy farm that they rang me and asked if I could take another nine dogs.

"They described what they found as 'hell on earth' and I will never forget seeing those dogs. It was absolutely horrific.

"The first thing was the smell and you couldn't tell which end of a dog was the head and which was the tail because they were so badly matted and covered in their own filth.

"We got a lovely local dog groomer to shave them and what was underneath was another sight I will never forget. They were virtually starving to death, just skin and bone and it was a miracle they were alive."

Catherine has been shocked by the scale of puppy farming since she launched her rescue service and says she never ceases to be horrified by the conditions some dogs are being kept in.

The vast majority of the dogs she rescues are from the puppy farms and often at the request of owners who no long have any use for the dogs either because they are too ill or too old to breed. She also has re-homed many pets who were neglected or abandoned by their owners.

While sadly such need encompasses every breed, Catherine says it is so great that her organisation cannot hope to re-home all dogs and so she opted to specialise in the breed that she loves.

"Every single breed is being puppy farmed and neglected and I'm passionate about all dogs, " she says.

"We have rescued different breeds but we can't rescue them all which is why we concentrate on Cavaliers. I can't even bear to think about the others, it's just too much."

Just last week the organisation - which is currently in the process of being granted charitable status - rescued 16 dogs from two puppy farms in Wexford.

Catherine has established a network of around 30 foster families across Ireland willing to take in and care for the animals until new owners can be found.

Foster dogs can stay with families for a couple weeks or some months, depending on their health, and the group is constantly looking for new people willing to volunteer to take a dog into their home.

The support for the group has spread through word of mouth and social media and Catherine says she is stunned by how quickly it has grown.

She is grateful to the volunteers and foster families who make the rescues possible and also for the support she receives when it comes to fundraising as the rescue group is entirely self-funded.

The need is great and the work rewarding and in many cases this handful of local animal lovers are saving the lives of Cavaliers as well as showing them human kindness and love for the first time.

"People are very passionate about Cavaliers, they are an adorable breed, " Catherine says.

"They have the sweetest nature and are so loving - there is not an aggressive bone in their bodies."

She explains: "Despite everything most of them have been through we find that with a little TLC and love they usually end up very happy pets.

"A lot of our calls are from puppy farmers who basically tell us they have dogs that are no good to them anymore.

"We took 30 dogs from one lady alone.

"wThe conditions many are kept in are horrific and the surprising thing is that most puppy farmers don't think they are doing anything wrong.

"It would break your heart. We had a wee one we picked up and its belly was completely covered in pus due to a severe infection that had been left untreated.

"We had a wee male Cavalier who was so badly neglected he didn't even look like a Cavalier. Most of them get over it but that one is still very traumatised and very frightened.

"We can nearly tell as soon as we get them what the medical issues will be from neglect and in almost every case they have infections in their ears and adrenal glands, problems with their eyes and skin and bad hearts.

"We have great vets who support us and know that they will be paid when the money comes in.

"We try to get them back to good health and then find new homes for them which, of course, are all vetted."