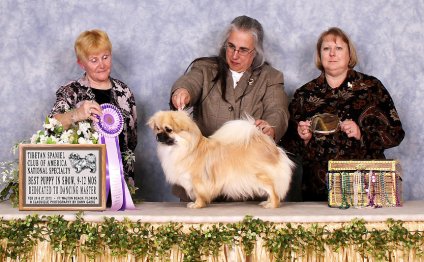 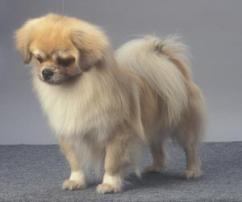 Tibetan Spaniels are relatively obscure in the United States, but they’ve been revered in their Himalayan homeland for more than 2, 000 years. They were often sent to foreign ambassadors as gifts.

In Tibet, Tibbies served as watchdogs at monasteries, remaining quiet and alert on the monastery walls until someone approached. As a result, they are very alert and observant, tending to bark when a visitor comes to the door. Tibetan Spaniels are also referred to as “little lions, ” a nickname that might stem from the mane or shawl of longer hair along their necks, or their resemblance to the Buddhist lion symbol.

These small dogs range from 9 to 15 pounds and join the Lhasa Apso and Tibetan Terrier in AKC’s Non-sporting Group of dogs. They train well and can excel at obedience and agility, but expect it to take a little more time and patience. They’re very intelligent - sometimes too smart for their own good. They enjoy playing games with you, but if you’re used to saying, “Come, ” and having your dog immediately respond, you might be frustrated at first with the Tibetan Spaniel.

The Dog for Cat People

Tibbies are quite catlike in some respects: They love laps and high perches, and they’re very low-maintenance. They’re aloof with strangers but are otherwise affectionate and friendly. If you favor felines but are ready for a dog, you’ll probably enjoy a Tibetan Spaniel.

Your typical Tibbie shouldn’t be aggressive at all. However, they can be assertive and they’ll hold their ground if they feel the need to defend themselves (even if it’s against a much larger dog). They like most other animals, with the exception of certain big dog breeds.

Tibbies are independent and not overly demanding, but they do love being around people. Other than keeping them close to you, they don’t need much to keep them happy.

This makes them wonderful small-quarters dogs. They do well in apartments, as long as they’re not left alone all the time. They really do need their people, although they’re usually pretty good with someone who goes to work in the morning and comes back at night. Tibbies love to run and play, but they don’t demand a lot of exercise like other breeds do.

Tibbies have a medium-length silky coat that doesn’t require a lot of grooming other than a weekly brushing. They do have an undercoat and they will shed. But their coat doesn’t get gnarled, and dried mud tends to shake right off.

As with any breed of dog, make sure you do your research first. If you’re thinking about adopting a Tibbie into your family, be fully aware that it should be a commitment for the life of the dog - in the case of Tibbies, that’s 12 to 15 years.

There aren’t many Tibetan Spaniel breeders in this country. These dogs are still fairly rare, and we like to keep it that way. We don’t want them to be one of those of-the-moment dogs. But if you do adopt one, it probably won’t be your last. 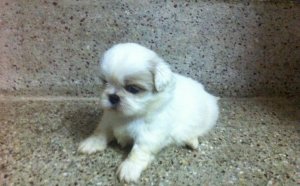 Overview Smaller, Tibetan Spaniels are intelligent and assertive being originated over 2 thousand and five hundred years…