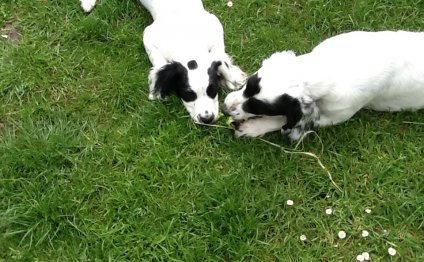 Provided by the Hunting Committee of the ESSFTA

The English Springer Spaniel is a dog that enjoys hunting; and the Springer's love for its work shows, especially in its lively, merry tail action, which is particularly animated when the dog is on game. The Springer quarters in a brisk, bustling manner, covering ground within gun range, always showing great desire and no fear of cover. The dog has a bold, hard driving flush that puts the bird up as quickly as possible to prevent it from running out of the handler's range. Speed, for speed's sake alone, is not required; but pottering is not to be tolerated. When the Springer is hunting and seeking body scent, its head is generally up, and experienced dogs use wind to advantage. When trailing, the Springer has its head down, seeking foot scent. Trailing is fast and efficient, yet always under control. Whether on land or water, retrieving is also fast and efficient, always carried out with enthusiasm. Throughout its performance, the Springer should demonstrate its "bidability, " especially in its responsiveness to soft, quiet handling. Dog and handler should always perform as a team.