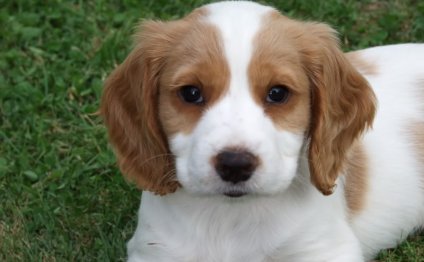 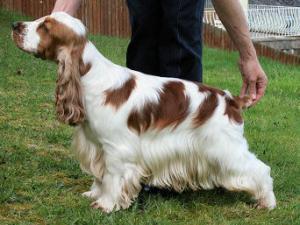 References to Cocker Spaniels can be found in literature going back to the early 1800s but the breed was not officially recognised by the Kennel Club until 1893. The Cocker is a sporting breed, originally used to flush out game birds like the Woodcock (hence the name Cocker) from the undergrowth towards the waiting guns. Retrieving ability was also bred into the breed as time went on so Cockers would not only flush out game but also go fearlessly into any cover and pick up fallen birds.

The Cocker is a relatively small but sturdy Spaniel with an engaging, happy personality, demonstrated by his ever-wagging tail. He comes in a wide range of colours, both solid (all one colour) and particoloured (the roans and and whites etc).

Todays modern Cocker has evolved into two separate strains, the show-type dog and the working-type dog (the Working Cocker).

The show-type dog is bred to conform to the KC Breed Standard and is the type of dog most often featured in calendars, books etc with the instantly recognisable domed head, long ears and long feathered coat (which needs regular grooming).

The Working Cocker is bred for working ability not physical looks and can look quite different to the show Cocker with shorter ears, a flatter skull, rangier body and far less feathering. Working Cockers are bred to work all day and have great stamina and intelligence which can make them a challenge for an inexperienced pet home (although they thrive in active homes which can offer sufficient exercise and mental stimulation).

Show-type dogs may appear more laid-back than their working cousins but they are definitely not lap dogs and many retain some working instincts. All Cockers tend to be busy little dogs with minds of their own. They need plenty of exercise (appropriate to their age) and consistent, patient training to get the best out of them.

Most Cockers are healthy dogs but there are some hereditary conditions to look out for. The most significant are prcd_PRA (also known as GPRA) and the kidney disease, FN (DNA tests are now available for both these conditions). As other eye problems are also seen, all breeding dogs should continue to be annually eye-tested (and be gonioscopy tested for predisposition to Glaucoma).There is also evidence of Hip Dysplasia in the breed so more breeders are beginning to hip score their dogs. It is important to stress that hereditary conditions are not confined to show-type dogs as PRA and HD are seen in working lines (although to date no case of FN has been reported in a Working Cocker).