The advent of a new century is a once-in-a-lifetime experience - cause for celebration, reflection and forward thinking all at the same time. Reflection, celebration, vision. Three words upon which to base our hopes for our Springers at an historic moment.

Reflection
The English Springer Spaniel crossed the Atlantic accompanied by the dreams of those who admired this all-purpose workman hunter. An athlete by day and a companion at the family fireside after that day's work, the Springer was, in the early decades of our fast-departing century, a do-it-all dog by necessity. Competition didn't enter the picture until the 1920's and the advent of competitive field events. Form followed function, and the new breed standard, crafted in the 1930's, described the functional athlete of that day before breeders began to select toward their own individual competitive goals.

As the 1930's progressed, things began to change as breeders selected toward competitive goals. However, the dogs remained a true dual type. During the 1940's, our last Dual Champion earned his title.

The 1950's saw the refinement of the American show Springer and the American field-bred Springer. Both "ends" of the competitive spectrum share responsibility for the divergence from true type that we are taking with us into a new millennium. Field trial competitors selected, from our root stock, those qualities that led to high performance. One cannot evaluate today's field trial-bred Springer Spaniels by reading the AKC approved breed standard.

Similarly, the show enthusiasts began to make their own selections. Exaggeration created a glamorous dog that became rapidly competitive in sporting group rings, drawing the interest of new exhibitors and breeders. Some maintained a commitment to dual function, and their breeding programs produced fine hunters that were representative of the breed standard. As we moved through the late 1960's and into the 70's, however, most show dogs had become so exaggerated that they, too, began to lose key elements of functional type.

How to Care for an English Springer Spaniel 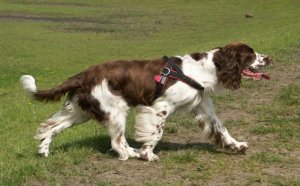