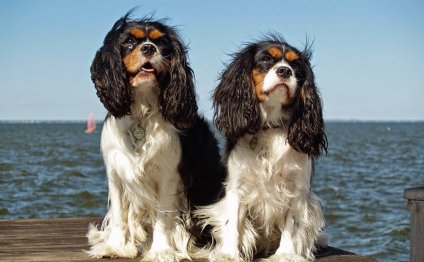 They have great smell and vision and can be used to hunt
animals in the open country. These are small dogs so if you
intent to hunt with your Cavalier King Charles Spaniel be
sure to allow the dog to rest or only go on a short hunt
with the dog. They do well in competitive obedience trials.

Breeders tried to reproduce a toy dog like dogs that were
portrayed in portraits during the reign of England's Charles
the II. Charles the II was known to dote on these little
dogs. Beginning in 1996 the AKC allowed the Cavalier King
Charles Spaniel to be shown in the Toy Group.

These beautiful little spaniels have dark expressive round
eyes that are large but not prominent. They have a flat
skull with a shallow stop. The dog has a comical muzzle with
a well developed nose and wide nostrils. The ears are long
with a lot of feathering.

According to the breed standard, the body is slightly longer
than it is tall. The height from the withers to the elbow is
approximately equal to the height from the elbow to the
ground. It has a moderate bone structure that is in
proportion to its size. Weediness or coarseness of structure
are penalized for this breed. The tail can be docked, but to
no less than one third its normal length.

The Cavalier King Charles Spaniel has a slightly wavy silky
coat that comes in colors of black and tan, Blenheim, ruby
and tricolor. Blenheim is a rich chestnut on a pearly white
background. On dogs with Blenheim coloring breeders like to
see a chestnut red spot between the ears, but it isn't
critical to the standard.

Meet Elizabeth the King Charles Cavalier for sale in ...